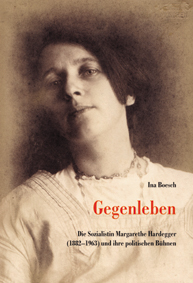 Margarethe Hardegger (1882–1963) embodied the social and political ideals which are referred to today as left-wing. She lived Socialism every single day. She preached and practiced free love. She was in contact with Munich’s Bohemian community and the Berlin anarchists. She took an active stance against fascism and fought for peace. For many decades she lived in the Swiss Italian-speaking canton of Ticino near famous Monte Verita and had vast international contacts. She was extremely loyal to her friends and even went to prison because of this. She became the first woman secretary in the Swiss Labor Union. Was the lover of the anarchist writers Gustav Landauer and Erich Mühsam. Friend of the union workers' doctor Fritz Brupbacher as well as chemist and pacifist Gertrud Woker.
In Margarethe Hardegger’s book Gegenleben (Counterlife) various life models characteistic of her time come together: In her being, she incorporates the socialist, the reformer and the freedom-fighter concepts of the first half of the Twentieth Century. Thus the emphasis of this work is not only focused on her biography but also upon these concepts, her life story as well as the organizations in which she participated.